The Midday Snack was pocket-sized patrol ration issued to the British Army during WWII.  The Midday Snack box is a reproduction of an original in our collection. It is shipped empty. 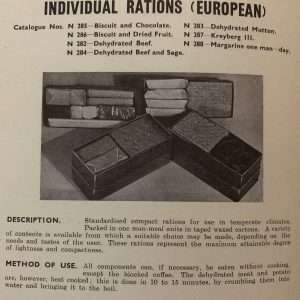 This box had been a bit of a mystery for us, until we stumbled upon the listing in the SOE catalog.  We’ve seen it listed as a Pacific Compo component, but with few details.  The Pacific Compo version of the Midday snack was also issued in a metal tin, making things even more confusing. The midday snack item is also referenced as a special, patrol ration.

We now believe that there were at least 7 menu variation on this ration, as well as both Pacific and European versions. The SOE catalog lists them as Biscuits and Chocolate, Biscuit and Dried Fruit, Dehydrated Mutton, Dehydrated Beef, Dehydrated Beef and Sage, and Kreyberg III.