This WWII One Pound TNT Block is a reproduction from an original in our collection.

The TNT block is thick cardboard, just like the original, with two caps.  The end cap has the correct size hole for display with a fuse or other firing device. The tube is EMPTY. The caps themselves are made of plastic and are not removable.

Our reproduction Nitrostarch is 4 separate blocks, over wrapped in a paper wrapper.  These were based on period engineer photographs as well as several explosive manuals.

Like the originals, the block holes are not prepunched through the wrapper, but each has the correct prescribed cap hole which runs through the entire block. The wrapper can be poked through with an awl, knife, or scissors to insert dummy fuse.

From FM 5-25: The 1lb nitrostarch package is a cube comprised of four quarter pound packages. A cap hole extends through the length of the ¼ pound blocks. Its position is indicated on the paraffin treated wrapper of the 1lb package.

A popular explosive during WWI, Nitrostarch was easier to handle then TNT but susceptible to water and moisture.  Ironically it was still used in D-Day preparations. It appears in the 1945 explosives and demolitions manual, but is eventually phased out after the war. 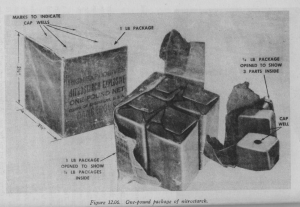 This is an INERT dummy for display only.